Dag Hammarskjöld - Visionary for the Future of Humanity

Stephan Mögle Stadel (1965 - ) is a journalist and publishing consultant. He studied history and psychology and furthered his studies at the C.G. Jung-Institute for Depth-Psychology. He is a member of the Erich Fromm society for Social Psychology. He also worked for a research organisation linked to the Club of Rome from 1996 to 1998. In 1990 he was correspondent in New York and a civil servant at the United Nations in 1992. Since 1993 he is chairman of the German section of WFM-International, a Non-Governmental Organization for the establishing of an International Court of Law for Crimes against Humanity (ICC Conference, Rome 1998) among other items.
Stephan has written also a book about UN Secretary General Kofi Annan entitled
"UN-finished Way - the UN in the 21. Century".

REVIEWS AND COMMENTS ON THE BOOK 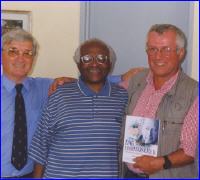 "Your book involved political as well as spiritual force."
DESMOND TUTU, Archbishop and bearer of the Nobel Prize for peace.

"This book is like a voyage to a sunken continent, carrying the name Dag Hammarskjöld."
DR. THOR HEYERDAL, archaeologist and author.

"Dag Hammarskjold's stands out. He had the power to evoke a vision. We remember him vividly because he kept the spirit of the Charter alive in the darkest times."
BOUTROS-GHALI, former Secretary-General
source: speech on 15. Sept. 1992

"His accomplishments, his innovations, and his vision are a great inspiration... to uphold the standards he put into place."
BOUTROS-GHALI, Secretary-General, source: speach on 18. Sept. 1996

"His life and his death, his words and his actions, have done more to shape public expectations of the office, and indeed of the Organisation, than those of any other man or woman in history. His wisdom and his modesty, his unimpeachable integrity and single-minded devotion to duty, have set a standard for all servants of the international community- and especially of course for his successors- ethic is simply impossible to live up to. There can be no better rule of thumb for a Secretary-General, as he approaches each new challenge and crisis, than to ask himself, "how would Hammarskjöld have handled this?"...
What is clear is that his core ideas remain highly relevant in this new international context."
KOFI ANNAN - Secretary-General of the UN.
On 6 th of September 2001 in Uppsala, Sweden (lecture "Dag Hammarskjöld and the 21st Century")

"Dear Friend, I was very moved by the manuscript about Dag Hammarskjöld. ... We have to overcome Nationalism in all its forms. Nationalism is unable to solve any problems; it is the problem - it poisons the human heart of the people."
(the late) YEHUDI MENUHIN - violin virtuoso, conductor and music-teacher in a letter to the author

"There are persons in international administration who believe that this book should be impounded."
DR. ROBERT MULLER - former UN Assistant Secretary General.

"Who knows what a statesman should look like, a statesman neither exisiting between nor within but above the nations. We are familiar with the national statesman and also with the cosmopolitan, but we do not know the cosmopolitician."
GÖSTA VON UEXKÜLL - Journalist and writer, published in the German weekly newspaper DIE ZEIT, 15. November 1956.